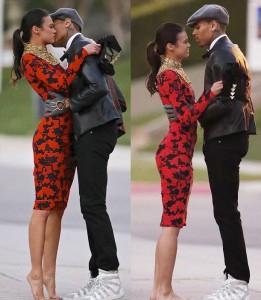 As expected, Brown dances up a storm in his new music video, where he falls for the daughter of a Mafia boss and whisks her away in his hot red ride from her mansion and her disapproving father and into a club where the handsome singer shows his lovely brunette partner his fancy moves, channeling Michael Jackson’s signature dance steps and even some of the King of Pop’s familiar singing style and unique runts. Breezy even exchanges some punches and martial arts moves with some of the Mafia boss’ thugs on the dance floor.

The cinematic video, whose track is reportedly inspired by Brown’s former relationship with model Karrueche Tran, ends in a stand-off between the Mafia boss’ crew and Brown’s club peeps, two sides which are both pulling out and toting guns at each other. In between the stand-off, Brown lets go of his lady with a sweet kiss, showing a different, romantic side to him, something that Breezy wanted to showcase in this video.

“I’m not one who always loves to stand in front of the camera with flashy cars and big booty girls all the time. In this video, you’ll see me taking care of the girl, doing gentlemanly things – showing another side of me. I know my female audience sees it. But the naysayers might say, ‘No, that’s not him,’ ” Brown revealed.

“Fine China” is one of about ten videos that Brown intends to put out before he releases his new album by early September at the most.