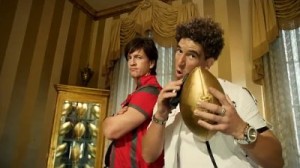 Brothers Eli Manning and Peyton Manning are normally seen on the field when they play as National Football League quarterbacks for the New York Giants and the Denver Broncos, respectively. But in a new three-minute commercial for DirecTV’s Sunday Ticket “Football for your Phone“, the siblings are rappers rhyming their way through the streets of their hometown New Orleans.

Dressed in stereotypical rapper wear, with Eli going to the extreme of putting on a curly wig and a fake tan for the part, the duo showcase the funny side they already brought before to the “Saturday Night Live” stage. Making a cameo in the TV ad is their own father, former NFL quarterback Archie Manning, who also wears a wig. He sits on throne with his two sons standing on each side.

Archie steals the show from his boys as he chimes in to Eli’s rap, “It’s like I spilled milk all over your blouse on accident, or on purpose. It’s like the milk is football and your blouse is the phone. Uh huh. Yea.” This one sure does beat the many other previous commercials they have been cast together for.

Prior to this new hilarious TV spot, Eli and Peyton have put on moustaches and no-nonsense attitudes for DirecTV’s 2011 “Football Cops” commercial on top of all the cool “This is SportsCenter” commercials they have done in the past.

Eli and Peyton Manning Rap in “Football on your Phone”: