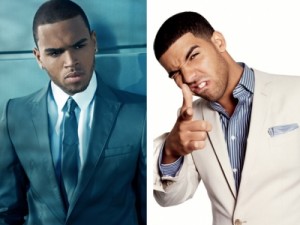 In what could be considered the best news of 2013, it’s being reported that Chris Brown and Drake have ended their long-standing feud. Yes, you’re reading correctly.

According to the New York Post, Breezy and Drizzy reportedly hugged it out at the iHeartRadio Music Festival in Las Vegas this past weekend where both artists were performing.

“Drake came on Friday (Sept. 20) with his whole crew, and watched Chris’ entire set,” a source told the newspaper. “[After Brown’s performance], they were backstage hugging and drinking.” During this supposed love fest, they even talked about recording music together.

You can thank Def Jam music executive Abou Thiam, who is Akon‘s brother, for brokering the peace treaty between these two superstars.

However, the fallout from Brown and Drake’s champagne-throwing brawl is still ongoing.

Although the $16 million lawsuit against the entertainers — filed by W.i.P club owners — has been dismissed, there are still a few legal cases pending in the aftermath from the fight.

Particularly, Brown’s bodyguard, Patrick “Big Pat” Strickland, who has filed a lawsuit against Drake after he was bashed on his head with a champagne bottle. The assault left him “disfigured to his face, head and eyes,” according to his suit. If his case moves forward, Brown would have to testify against Drake, right?

And there’s also a French model who is suing the two music stars after his hand was injured during the melee.

So now that Brown and Drake are friends, does this mean that they will come together and help pay restitution for the patrons who were injured during the club brawl?

So you can see why this story sounds kind of fishy.

Nevertheless, if this report is true, then we’re ecstatic that Brown and Drake have buried the hatchet and are now bosom buddies.