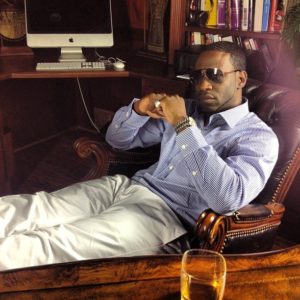 Grand Hustle signee Young Dro isn’t a bad guy, in fact, at a recent studio session in Atlanta, the ‘F.D.B.’ creator is all smiles. Donning a fitted cap, The Hundreds T-shirt and all-white Supras, the rapper seems to be basking in the critical acclaim of his latest mixtape, ‘Day Two.’ “I just did what I normally do,” he tells TheDrop.fm with a shrug. “I’ve been doing this since I was like, 12. And before that I was singing in the choir with my grandma so I was always musically inclined.”

Tonight is for planning, there’ll be no recording this evening, says Dro. “My next single is being debated on,” the 34-year-old shares. “We’re having arguments, which is great. It’s always good to argue about how talented a person is.”

“It’s not like we in here, ‘The single gotta be this one, ‘cause the rest of ‘em are s—,’” he adds with a grin. “Every song that I really had on ‘Day Two,’ everybody was like, ‘Video, video…’ But that’s impossible. We’re gonna shoot a lot of ‘em. It’s gonna be a lot because you can’t keep letting ‘em sleep on Dro.”

The Atlanta native isn’t even in his usual Polo wardrobe tonight — it’s like he has the same mindset, but moving towards a whole new outlook. This is a great thing since Young Dro fans have been waiting about seven years for a follow-up to his debut LP, ‘Best Thang Smokin’,’ released in 2006. The fact that the head of Grand Hustle had a few legal issues around that time couldn’t have made things easier, but Dro doesn’t hesitate to accept some of the blame.

“The way I was living and the decisions that I chose, that was all a part,” he says. “I didn’t make it any better and he didn’t either but at the same time, our hearts were always in the right place and that’s why we still here.”

He may be right and as lighthearted as Dro is, one of his standout verses over the past year was on the mixtape cut ‘Err Body,’ from Hustle Gang’s recent ‘G.D.O.D. (Get Dough Or Die)’ tape. On the track, he andT.I. go back and forth about whose fault it was that former Grand Hustle signee Yung L.A. was inked in the first place.

“That was actually a real conflict,” he reveals. “Me and Tip was in the room one-on-one for hours. I was like, ‘Yo, Tip, you finna take me…’ He was like, ‘We gotta address it bruh.’ And we did. But the reason I ain’t like it was because me and Young L.A….,” he says, trailing off.

“I didn’t grow up with him. When I got on and pulled up in Thomasville [Ga.,] in an Aston Martin I was buying some weed. They were like, ‘Why he don’t never put no n—- on from the hood?’ I asked, ‘S—, who rap?’ They like, ‘Shawty right here.’ And he jumped in the car with me and ain’t come back till he came in his own Benz.”

Why talk about it now though? Why pick the Hustle Gang tape to poke fun at the ‘Ain’t I’ creator? Dro says that it was something that he and T.I. had been meaning to tackle for quite some time but just got around to scratching off their to-do list. “It just had to be addressed,” Dro says “[Yung L.A.] said a couple of things about our record company and about our colleagues that was very disrespectful, in front of a lot of people, and we didn’t say nothing.”

“Tip was locked up and I was just like… But it takes time to address things, if you do it too fast then you look like the asshole. We don’t really like to come in swinging because it ain’t cool to do that but we end up whooping everybody ass in the room.”

With the growing success of ‘Day Two’ and the upcoming LP, ‘High Tymes,’ Young Dro seems to be ready for whoever wants it next.

“I feel like I just have to work harder, knowing that I’m better,” Dro explains. “That’s humbling. That’s like a journey. When I get through with this s—, I’ma be so well-rounded to the point where everything gon’ look like a circle to me. It’s been a long time that I’ve been doing exactly what I love to do. This is not a job to me.“

In honor of his new song, ‘F.D.B. (F— Dat Bitch),’ the rhymer has some fun with TheDrop.fm by sharing some moments that would actually cause him to utter those offensive words to the opposite sex.

3. “When I ask for sour cream with the chili at Wendy’s and don’t get the sour cream? Man, f— that bitch, for real holmes.”

4. “If a girl like you so bad and she ain’t all what you thought you liked and she says she f—ed you and went to telling people. F— that bitch too ‘cause she’s knocking you around other girls that really like you. Now she lowered your rating like 50 percent, so yeah, f— that bitch.”