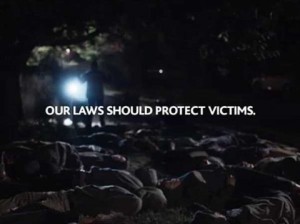 In this new just-released PSA by the Coalition to Stop Gun Violence, we see a reenactment of the night Florida teen Trayvon Martin was killed.

The goal here is simple: the coalition wants the Stand Your Ground laws to be repealed nationwide. In this video, the nonprofit group uses the actual 911 calls from shooter George Zimmerman and another witness made. And what happens after we hear the gun shot is an image of people in hoodies lying on the ground in the rain, with the names of the more than 20 states where the law exists popping up over the bodies.

The group has launched a website and a petition asking people to urge their state lawmakers to “oppose this immoral legislation.”

“‘Stand Your Ground’ laws have essentially legalized murder. With this PSA, we hope to add to the nationwide push to repeal these immoral laws,” said CSGV Communications Director Ladd Everitt.