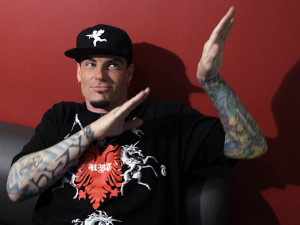 Vanilla Ice is set to make an appearance at halftime show of the upcoming NFL game between Houston Texans and Tennessee Titans, Billboard has reported. The 45-year-old rapper is set to perform on the stage at the Reliant Stadium in Houston, Texas, on Sunday, September 15.

Vanilla Ice’s performance will be a part of the Texans’ “Liberty White Out” festivities. All fans, who are coming to the game, are urged to wear all-white. According to The Houston Chronicle, the 2012 AFC South Championship banner will be unveiled at 11:30 A.M. and Clay Walker will sing the national anthem.

In recent years, Vanilla Ice has been known as reality TV star. He found a new success as a TV handyman on DIY Network’s “The Vanilla Ice Project”. However, he still manages to work on new music. His latest projects in music include 2011’s “WTF”, which stands for Wisdom, Tenacity and Focus.