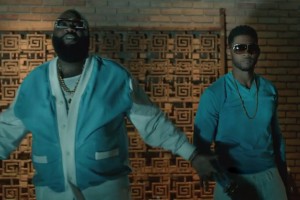 After dropping the aquatic ‘Scream‘ video, Usher comes through with a sensual clip for his R&B hit ‘Lemme See,’ featuring Rick Ross. The song appears on the singer’s new album ‘Looking 4 Myself.’

In the clip, Usher has his lover tied up as he sings lustful come-ons in her ear. As she wiggles herself out of the ropes, the pair heads to the bedroom where she embeds her tattoos all over his body.

Elsewhere, we see a shirtless Rick Ross draped in diamonds chilling in the sauna with two females as he lays down his mackadoshis verses. The final sequence features Ursh and Rozay by the pool performing the sultry track.

‘Lemme See’ is the third single from ‘Looking 4 Myself, which is reportedly poised to sell an estimated 130,000 copies in its first week of release. It’s also set to hit No. 1 on the Billboard albums chart.