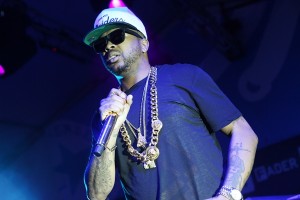 During a listening session at New York’s Jungle City Studios, songwriter Terius Nash a.k.a. The-Dream previewed his forthcoming fifth album “IV Play”.  As the 35-year-old artist rolled through the tracks of his new LP on his iPod and entertained some questions after each session, it was revealed that the prolific hitmaker got divas Beyonce Knowles and Mary J. Blige among the superstar collaborators who supported his new project.

Meanwhile, the one and only Mary J. Blige will appear on the final version of the track “Divine”, an inspiring song that will make the listener feel that he or she is a huge superstar standing on top of the world. The-Dream says he will take the song even higher by blending the big, orchestral track with the unique, soulful vocals of the Grammy Award-winning singer.

Besides Bey, The-Dream has enlisted her BFF and Destiny’s Child sister Kelly Rowland on the piano-driven, almost-break-up anthem “Where Have You Been”. He’s also going to get Mr. Carter, Jay-Z, on the final edit of the trap-inspired, bass-heavy jam “High Art”.