Soulja Boy is facing legal action over an alleged hit-and-run accident. According to RadarOnline.com, the emcee is being sued by a man named Gabor Turi, who was reportedly involved in a hit-and-run accident with Soulja’s friend Abrahim Mohammed Mustafa. Court documents claim that on January 9th, Mustafa was behind the wheel of Soulja’s Bentley in […] 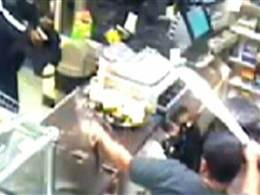 Store Clerk Brought A Knife To A Gun Fight

Police have revealed footage of a convenience store clerk on Long Island standing up to a gunman by surprising him with a 2-foot machete. The video of last month’s confrontation has been released in hopes of apprehending the anonymous gunman.

Some people apparently tried to break into Rihanna’s Pacific Palisades mansion when the singer was in Australia over the weekend. According to a TMZ report, they drove to her mansion and went to the backyard before throwing a chair through a sliding glass door. The intruders, who apparently were scared off by the alarm, left without entering the house. […]