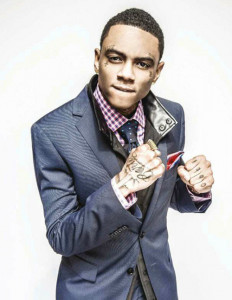 According to RadarOnline.com, the emcee is being sued by a man named Gabor Turi, who was reportedly involved in a hit-and-run accident with Soulja’s friend Abrahim Mohammed Mustafa.

Court documents claim that on January 9th, Mustafa was behind the wheel of Soulja’s Bentley in Los Angeles.  He supposedly hit Turi’s vehicle, causing him to be “ejected from his vehicle.”  He sustained a number of injuries, including a broken right shoulder.

Mustafa supposedly fled the scene.  While Soulja wasn’t in the car at the time, he’s being sued alongside Mustafa because Turi says the rapper knew, or should have known, that Mustafa and the others in the Bentley “were incompetent and/or unfit drivers.”

Turi is asking that Soulja, Mustafa and a number of unnamed defendants pay for his medical expenses.  He is also seeking an undisclosed amount of damages.