Solange Performs In A Laundromat 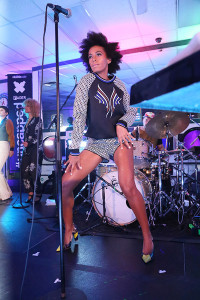 Imagine yourself washing clothes at a laundromat and all of a sudden, Solange comes in and performs an impromptu concert. Well, Beyonce‘s sister did just that Monday night (July 29) in Brooklyn, N.Y., as part of vitaminwater and FADER’s #uncapped series.

The R&B mom rocked an intimate set at Brooklyn’s Atlantis Super Wash Center. She performed songs from her ‘True’ EP as well as a cover tune that was apropos for the occasion.

“This laundromat really has me wanting to be a drama queen tonight, so excuse my theatrics,” Solange said before she performed ‘Bad Girls’ from her ‘True’ EP.

Solange’s outfit was to-die-for. The songbird wore a printed sweatshirt and matching shorts outfit from Clover Canyon’s 2014 Resort collection, which revealed her never-ending killer legs. The daffodil yellow-colored snakeskin heels completed the whole ensemble. Not only was Solange fashionable she was functional as well. You go girl!

During her performance, she sang a cover song of Nivea’s 2002 hit, ‘Laundromat,’ which was appropriate for the event.

“‘Laundromat’” might actually be, and my best friend can co-sign, one of my top 15 most-played songs,” Solange told Fader magazine after the show. “Since it came out, I’ve always wanted to cover it and as soon as I found out that this was going down in a laundromat, it just had to be done. I wish we would’ve had more time to rehearse it, because being R. Kelly and Nivea at the same damn time is just not possible. So I was trying my best.”

Of course, Solange couldn’t finish her show without performing her breakthrough song, ‘Losing You.’

The 27-year-old singer certainly worked up a lather as she sashayed back and forth onstage between washing machines and circular dryers performing her break-up ballad.