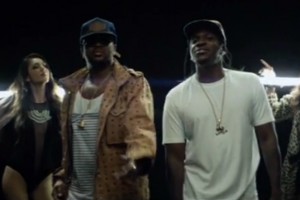 The-Dream released his uncensored video for his catchy single ‘Dope B—-’ featuring G.O.O.D. Music artist Pusha T. I say uncensored because I don’t think the visuals or the lyrics in the clip will get past BET’s censors at all. It’s a cool video with The-Dream and Pusha describing their perfect lady.

Directed by Lance Drake, the clip features plenty of visual metaphors of drugs and music. The-Dream uses the bodacious model Brittany Dailey as his muse to illustrate his addiction to his ladylove. We also see the R&B crooner performing his song on a stack of kilos of cocaine. Talk about getting high!

Pusha T is also in the mix sitting on a chair made out of packs of cocaine. In one scene, a slim model pulls out a switch blade and cuts open a package of cocaine. There’s also a bevy of video vixens toting semi-automatic guns so not only are the ladies gorgeous, they are dangerous, as well.

‘Dope B—-’ is the lead single from The-Dream’s upcoming LP ‘Love IV MMXII,’ which arrives in stores in the fall.