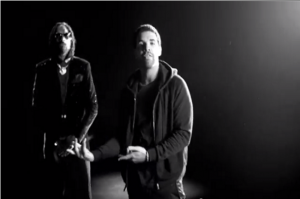 Taking newspaper headline clippings and audio-visual footage from recent shooting incidents as the backdrop for his new single “No Guns Allowed”, Snoop Lion a.k.a Snoop Dogg debuts a simple yet powerful new music video that drives home his firm anti-violence message. The 41-year-old artist sheds his gangster rapper persona for his newly-discovered reggae alter ego on this track and his forthcoming new album “Reincarnated”, set to debut on April 23.

Snoop clearly wants to impart a strong message with the Jessy Terrero-directed visuals, starting the four-minute clip with no less than President Barack Obama in recent news footage where he was speaking about the Sandy Hook Elementary School shooting tragedy that happened back in December. With the desire to “spread the message of non-violence and the importance of unity and peace,” Snoop then shows the harrowing images from the recent spate of mass shootings in and outside the United States to appeal an end to innocent killings.

The new clip also doesn’t lack in formidable reinforcements, with Canadian rapper Drake rapping a verse about a shooting incident in his native Toronto that marred a neighborhood party killing two of his own friends and injuring several others, including a helpless toddler. Snoop’s own daughter, Cori B. also handles the hook very well, singing with a gospel choir as they do backing vocals for his father.

“It’s a powerful song and we hope to spread a positive message,” Snoop said about his new work. “We’ve seen too much bloodshed involving guns and we want to prevent the next incident from happening. That’s what it’s all about, trying to bring awareness and push love and peace.”