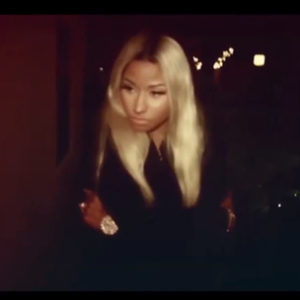 Rapstress Nicki Minaj makes a 360 degree turn in her music video for new song “Up in Flames”. After displaying her curvaceous figure in her “High School” visuals dropped last week, the 30-year-old entertainer appears all covered up in the no-frills clip, shifting the attention from her physical assets to her rap skills instead.

The five-minute-plus clip features motorcycle stunts done by Jason Britton, Safaree “SB” and Phenomenhan with stunt cinematography masterfully handled by Max Albert. Minaj, meanwhile, stays put indoors, sitting before the fireplace before pacing to her piano and playing behind it as many candles are lit on top of it.

Past halfway through the track, the music video then shows Minaj working in the studio, standing either behind the microphone inside the recording booth or the mixing console. It gives fans a peak into the work put in by the Cash Money records artist, just as when she first started her now very successful career.

She’s letting her loyal Barbz see what she really does best on top of the sexy outfits and raunchy music videos she’s been usually associated with. She also gets to show she does have talent and not just the hype, managing to sound credible as she gives her critique on her regular show “American Idol”.