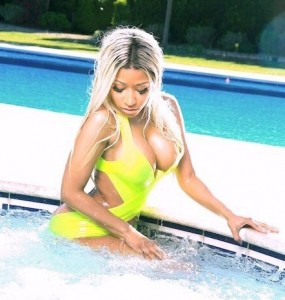 Rapstress Nicki Minaj finally drops her “High School” music video, after teasing her Barbz with sexy photos from the video shoot where she displayed both her abundant cleavage and derriere. Apart from just posing seductively for the cameras, the voluptuous diva also gets to have an on-screen romance with her Cash Money Records boss Lil Wayne on the four-minute, Benny Boom-directed clip for the latest single off her album “Pink Friday: Roman Reloaded – The Re-Up”.

The cinematic video features Minaj in the role of a drug lord’s girlfriend who plots to steal his vault-strapped cash and jewels before she disappears with Wayne. Before that happens towards the end, the sexy rap star first figures in a steamy love scene with Weezy where they almost lock lips, something that the 30-year-old artist admitted became awkward.

“Not only is he my boss, but he’s also like my brother. It’s very weird because I’m just used to Wayne making fun of me,” Minaj revealed how uncomfortable it became, especially since she also could not help admiring the Young Money mogul. “But it’s still like Wayne is still so sexy and so I texted Wayne and I was like, you’re going to have all the chicks back on you, know what I’m saying? Because when this video comes out, he looks like art, he looks like a piece of art all tatted up, all sexy, black and beautiful.”

Contrary to what fans might expect, Minaj spilled the beans on how Weezy acted like a complete gentleman all throughout the delicate video shoot. “He refused to touch me, he’s so respectful, he refused to touch me,” the petite bombshell revealed, complimenting her classy co-star as saying, “He’s a southern gentlemen, which people don’t realize.”