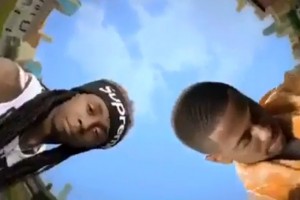 Lil Wayne and Big Sean bomb the suburbs in their zany video for ‘My Homies Still.’ The PARRIS-directed clip shows Weezy as the ringmaster of a neighborhood filled with wacky neighbors, discarded mannequins, a dancing panda and a pink elephant. WTF?

The clip starts off with Wayne doing the dougie next to a pink elephant before he zaps a neighbor’s head onto the body of his pet dog and vice versa. We also get to see the Young Money leader rapping upside down in a zebra-stripped outfit. (Guess he didn’t see Affion Crockett’s parody video yet.)

Meanwhile, Big Sean joins the circus sitting on a lawn chair with a bony chick (who is clearly thin-skinned) as he slides through the neighborhood on a dolly similar to DJ Jazzy Jeff and the Fresh Prince’s video for ‘Summertime.’ Elsewhere, Sean’s head gets served on a platter for his masked dinner guests.