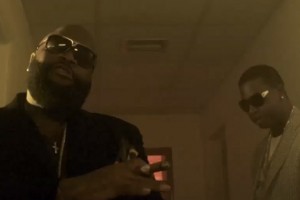 Just when we thought Gucci Mane has left the building, he’s back with a new video. This time he invites viewers into the seedy world of the drug game in ‘Trap House 3,’ co-starring his partner-in-rhyme Rick Ross.

Apparently, the clip tells the story about two street hustlers carrying out a major deal of cash and drugs at the trap house. Of course, when it comes to the drug life, there’s going to be some type of danger. This leads to a rival drug crew setting up to raid the crib with Guwop and Rozay inside.

Although these two big-time rappers are clearly not involved in the drug game, the video should be viewed as entertainment for mature audiences. The visuals are alluring and hold your attention thanks to the superb direction of Dre Films.

And let’s keep it real, the slow-grinding, sinister beat is quite addictive to the ear.