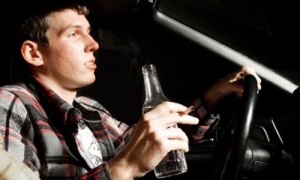 Drunken driving charges have been filed against a southern New Jersey man who authorities say was driving a box truck that was on fire and missing its front tires.

Lakehurst police tell the Asbury Park Press that 36-year-old Michael Newmon of Manchester was hanging partially out of the cab window because of a shattered windshield when he was stopped around 3 a.m. Saturday.

Authorities say the truck had tree branches caught in it, with fire and smoke coming from below.

Because the truck was driven on its rims, police followed the marks left in the road and traced Newmon’s journey about 15 miles to the Route 70/Route 72 circle in Burlington County. They found the truck had driven across the circle, struck a tree and drove through bushes.