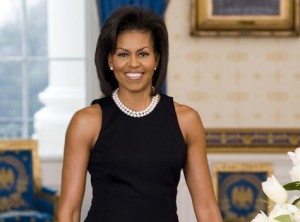 First Lady Michelle Obama is already eyeing a new career once her White House days are over. FLOTUS may have a future as a rapper.

The Grio reports that the First Lady is distributing a hip-hop album complete with 10 music videos and 19 tracks to support her “Let’s Move!” nutrition program.

The video shows children of all ages dancing lightheartedly between takes of kids doing jumping jacks push ups, and drills.

“Everybody tell somebody, it’s your body. C’Mon,” sings Sparks on the chorus. Doug E. Fresh and Dr. Oz trade short verses about exercise and heart health.

“The best way to do this is to build a bridge with the artists that they see on television and listen to,” said Dr. Oz. “When someone like Doug E. Fresh shows our youngsters that health can be fun and cool, we are winning the battle.”

Some other tracks on the album include “Veggie Luv”, “Hip Hop LEAN”, and “Get Up Sit Up” most of which will be hip-hop based, according to U.S. News and Wold Reports.

“This album is about more than just a great message and it’s about more than great music,” said PHA’s Chief Marketing Officer Drew Nannis. “It’s about making the healthy choice the easy choice… The simple act of getting up and dancing is a great way to get active and this album – and the dozens of generous musicians who helped make it possible – can help show us how. The added motivation of trying to do the Dougie better than Dr. Oz doesn’t hurt either.”

Watch the video below!