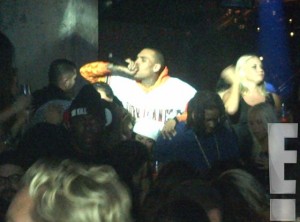 Clearly Chris Brown and Drake have yet to make amends from their New York nightclub brawl last June.
After attending a charity benefit at a Studio City, Calif., bowling alley on Wednesday night, Brown made his way to the Emerson Theatre in Hollywood.
An eyewitness there tells E! News exclusively that around 1:20 a.m., Brown hopped up from his center table under the DJ booth and requested the mic to speak to the crowd. The DJ had Drake’s song, “Started from the Bottom,” cued up and Brown immediately told the DJ to stop playing the music. Addressing the crowd, Brown reportedly shouted out, “The DJ can play this s–t, but I want you all to know, F–k Drake!” and gave everyone the middle finger.