Chris Brown checks in and out of jail; Tweets that he’s quitting music 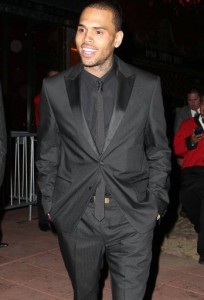 Chris Brown checked himself in and out of jail in a matter of minutes on Monday, for charges stemming from his alleged hit-and-run case back in May.

According to Los Angeles Sheriff’s Department records, Brown turned himself in at 2:40 p.m. at Van Nuys Valley Jail, and was released at 3:22 p.m. with no bail set. A rep for the singer noted that getting booked was the next necessary step in having a judge actually hear Brown’s case.

“Two counts against Chris Brown were dismissed yesterday in relation to the Hit and Run charge to which Chris pleaded Not Guilty,” Brown’s rep said in a statement. “In order for the charge to be heard by a judge, Chris has to be officially booked. We expect this charge to be dismissed as well, as the lawyer for the driver in this case clearly specified that his client did not want to press charges.”

It’s not uncommon for Los Angeles residents booked on misdemeanor charges to be set free quickly based on their own recognizance, due to overcrowding in the L.A. jails. Lindsay Lohan, Paris Hilton, and Nicole Richie have all checked in and out just as fast in the past.

Brown now faces just one misdemeanor charge in the alleged hit-and-run case from May 21 — the actual charge of hit-and-run — to which he has pleaded “not guilty.” The charges of driving without insurance and driving without a valid license were both dismissed.

Brown’s attorney, Mark Geragos, told omg! that Chris has reached an agreement with Olga Kovalenko, the other driver involved in the incident, and that he’s asking the judge to have this last charge dismissed as well.

On July 15, Brown had his probation (which stemmed from the 2009 beating of his ex-girlfriend, Rihanna) revoked due to the hit-and-run incident. He is due back in court on August 16 for a hearing regarding his probation.

And it looks like the media scrutiny and legal pressure may finally be getting to Chris. On Tuesday morning, he tweeted that he’s planning to stop making albums soon:

Being famous is amazing when it’s for ur music and talent. I’m tired of being famous for a mistake I made when i was 18. I’m cool & over it!

Maybe just taking a break would be a better idea? The singer was photographed out late the night before his arrest. He was seen (pictured above) leaving AV nightclub in Hollywood at around 2 a.m.