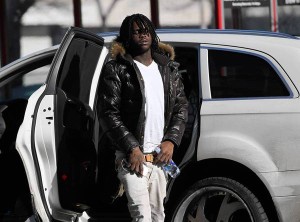 The Cook County’s sheriff’s office said that the Chicago rapper failed two drug tests and, after a court appearance yesterday, was being transferred to the Cook County Jail, the report says. Chicago is in Cook County, Illinois.

Chief Keef is set to serve his sentence at the Haymarket Center, as per dnainfo.com.

In court Finna go to Jail Judge Wants to send me Back http://t.co/d4O1bQDNE4