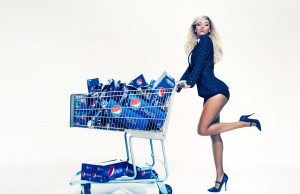 Another new Beyonce Knowles single is on the way, following her previous track “Bow Down/I Been On”. Called “Grown Woman”, the first official offering off her next studio installment is teased in a new commercial for Pepsi, the soft drink the Queen Bey is currently endorsing, before it’s unveiled in its entirety next Monday, April 8. It’s produced by Timbaland.

True to the title of the fresh tune, the Pepsi ad features the Destiny’s Child member facing the mirror and seeing her transform into the woman she is today. Not only does it see her during her 10-year solo career in the industry which includes her “Crazy In Love” era with Jay-Z and her Sasha Fierce but also from her DC days.

She sings, “They like the way I walk cause I walk with a vengeance/ And you listen to me when I talk cause I ain’t pretendin’/ Took awhile now I understand just where I’m going/ I know the world and I know who I am ’bout time I show it/ And I’m moving down like that when I do it/ I could be bad if I want / I can go slow all night long / I’m a grown woman.”

“Embrace your past, but live for now,” so she says.