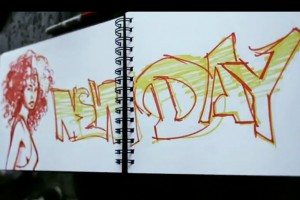 It’s clearly a ‘New Day’ for Alicia Keys, who has unveiled a lyric video for her latest track, which features an urgent beat and edgy production. To match the “street” feel of the song, the video shows graffiti-style drawings of the lyrics, first in sketch books and then on actual walls with spray paint.

The words are somewhat repetitive, so the effect of seeing them written out in multiple places works really well. Even the cans of spray paint are labeled with lyrics from the song. Keys is stepping out of her comfort zone and trying something with more of a grimy feel, and the lyric video reflects that.

‘New Day’ will most likely appear on Keys’ next album. In a video message to her fans last month, Keys discussed the new music, saying, “I am an animal right now! I am ready to be set free in a whole other way. When it comes to sharing this music with you, I am like a caged animal that is dying to escape.”

The track was produced by Keys’ hubby, Swizz Beatz, who referenced the new song when he spoke about his wife’s career at the BET Awards, telling Zap2It, “She’s in whole new creative place. It’s a new day for music. It’s a new day for her spiritually, mentally.”