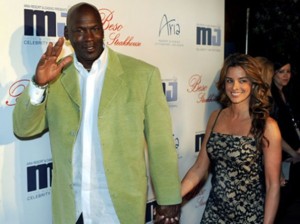 The second Atlanta woman in recent months to claim basketball legend Michael Jordan fathered her child has had her lawsuit tossed out.
Laquetta Theus, 30, filed a paternity suit in August claiming Jordan was the father of her 3-year-old daughter. But a previous paternity test had previously determined that another man, Hubert Henderson Jr., was the father of Theus’ child, and her suit was dismissed earlier this month.
Theus, who did not have an attorney, also contended in the lawsuit that Jordan used Hubert Henderson’s name as an alias.