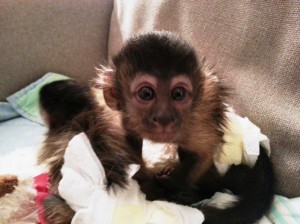 Police in Grand Junction, Colo., are seeking a man who allegedly pepper-sprayed a woman in the face and then stole her pet monkey.

The woman, who traveled from Missouri to Colorado to sell her black cap Capuchin monkey, met the suspect Monday in the parking lot of a La Quinta Inn motel with her primate in a carrier.

The man then sprayed the woman in the face, grabbed the carrier and fled the scene on foot, Kate Porras, Grand Junction Police Department information coordinator, told NBC News.

Porras said the woman had communicated with the man online, in text messages and phone calls.

The woman’s injuries were not considering life-threatening, Porras said.

It is illegal to own a primate in the state of Colorado, Porras added. The woman has not been charged with a crime.