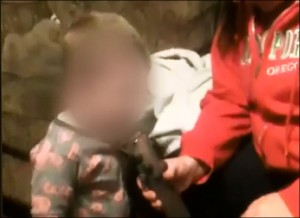 This is not the kind of higher education most parents support.

A Washington state mother is accused of letting her 22-month-old toddler smoke marijuana from a bong,  police said.

Police said they received cell phone video from an anonymous source of a child taking what appeared to be a bong hit while his mother — identified as Rachelle L. Braaten, 24,  of Centralia, Wash. — held the pipe.

And when police went to couple’s home, they found 30-40 marijuana plants as well as firearms.

The child’s father Tyler J. Lee, 25, was accused of unlawful possession of a firearm and manufacturing marijuana.

The woman is being accused of unlawful delivery of a controlled substance to a minor as well as manufacturing marijuana.

The boy and another child were taken into state custody after the arrests.

A Seattle TV station obtained the cell phone video from Centralia police and posted it online. The video appears to show a child dressed in camouflage shirt briefly putting his face to the top of a lit water pipe.

Lee was released on Monday pending charges, KOMO-TV reported. Braaten was booked into the Lewis County Jail and was still listed on the jail roster on Tuesday afternoon. Her bail was set at $20,000.

However, it is still illegal to grow marijuana for recreational purposes in the state. The Washington Liquor Control Board was given until Dec. 1 to develop rules for implementing the law.