TRINA BEING SUED FOR 50 MILLION 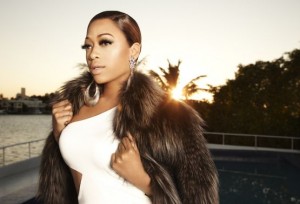 From CourtHouseNews Service, “Hip-hop artist Trina backed out of an agreement to appear as a judge in an event called “America’s Next Top Rapper,” a Queens-based media company claims in court.
Omnipresent Media and Lawrence “Amar” Wright sued Katrina Taylor pka Trina, her managing agent Rarebreeed Entertainment, its principal Josh Burke, all of Florida, and J Ego Entertainment and Nunoise Travel, in Queens County Supreme Court, New York.
Omnipresent hosts an online streaming video platform and a competition called “America’s Next Top Rapper.”
“If you’re an unsigned artist, or just looking to break into the rap game, or you need that major exposure, ‘America’s Next Top Rapper’ is where you need to be,” a rapper says in a promotional video on Omnipresent’s website.
A website promoting Omnipresent’s competition claims that aspiring rappers can win $20,000, a distribution deal with Universal, and “a hit production team,” among other things.
Omnipresent claims Trina agreed to judge the competition, then backed out. The competition was to be held Dec. 30, 2011 in Dorchester, Mass., before a three-judge panel.”