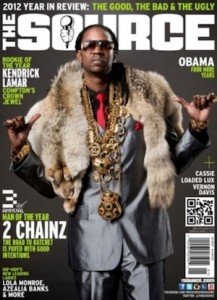 In 2012, no rapper was more prolific than 2 Chainz. This year alone, the Atlanta rapper made guest appearances on over 40 songs. So it’s only right that Source magazine crowns him “Man of the Year” for their annual year-end issue.

The artist formerly known as Tity Boi is dressed to the nines on the cover with his grey suit and red tie. The rapper is heavily accessorized in lavish gold necklaces, bracelets and rings. The magazine features an in-depth interview with the rapper who talks candidly about his early rise to stardom, his incredible work ethic and changing his name from Tity Boi to 2 Chainz. “It wasn’t like my name made me rap better,” he says. “I worked my a– off. It felt good to outdo myself and just be omnipresent and be a part of everything.”

True indeed. If 2 Chainz wasn’t on your favorite rapper’s hit song in 2012, then he was dropping his own club anthems like ‘No Lie’ (featuring Drake).

Mr. Deuce tells the magazine that his come up wasn’t easy and compares the rap game to an uncontrollable zoo. “Those who haven’t been through that struggle don’t mind going to the zoo to pet the animals,” he explains. “They don’t wanna live in the zoo, but they don’t mind coming through. I’m someone who can show you around in a cool way where you don’t have to worry about getting eaten up.”