Thanksgiving for the supremely lazy: The $80 box of frozen, pre-cooked Thanksgiving dinner for 10 (minus pie) from Costco 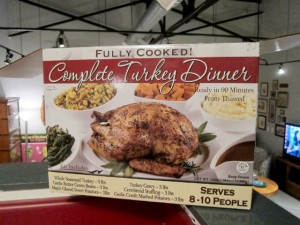 Although Costco is well known for having excellent options for throwing parties or serving large dinners — the moist, delicious sheet cakes alone are a triumph of industrial-scale baking — We’d never seen a fully-cooked, ready-to-heave-at-your-guests box of Thanksgiving dinner before this past weekend. Yet there it was, squatting resolutely in frozen foods aisle. 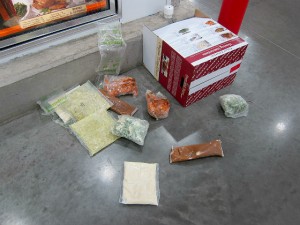 The box promised to feed a group of eight to 10 people (sans desserts; what the hell — that’s the best part!) for the low, low price of $79.95. And because the entire meal is pre-cooked, the box claims that it can all be ready in 90 minutes — after thawing.

Here’s a quick run-down of how the individual items shook out: 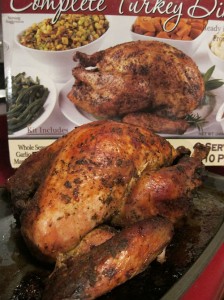 Good: Pre-cooked, so you won’t kill anyone if it’s still a bit frozen inside. Dark meat surprisingly juicy and moist, especially if you follow the instructions and baste the turkey every 15 minutes.
Bad: Way too heavy on the sage rub, which tastes like dumping a jar of dried spices into your mouth. White meat dry. Skin mostly tough. 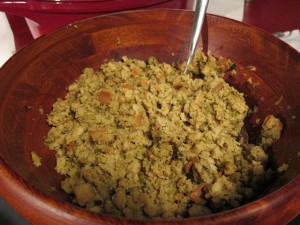 Good: Nice, fluffy texture that was a shock considering the amount of ice crystals in the plastic bag and the fact that we took the easy route and ran the stuffing through the microwave instead of putting it in the oven for 45 minutes.
Bad: Like the turkey, way too heavy on the sage. Also, super salty. 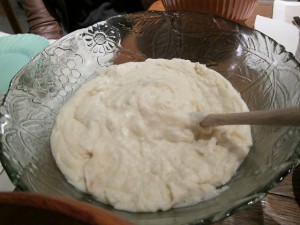 Good: Everyone agreed these were the best item of the night, with a creamy texture and strong roasted garlic flavor. They looked the scariest of all the dishes when warming on the stovetop, but ended up looking the nicest on the table. Perfect amount of salt.
Bad: If you’re not a garlic fan, you may find the flavor and scent overwhelming. And if you’re a chunky mashed potato fan (or hate mashed potatoes that have been put through a ricer), you may find the texture off-putting.

Good: They were green?
Bad: Antithetically, these were by far the worst of the box. “They squeak when you bite into them,” my mother said with a sad look on her face. The green beans did not remotely resemble the long, elegant haricot verts on the box but rather the dull green beans that are dumped from a 10-pound can into a steam table tray at your local high school cafeteria. (If your high school still even serves vegetables to its kids anymore). The sheer amount of butter, onions and garlic in the beans were overwhelming as well. 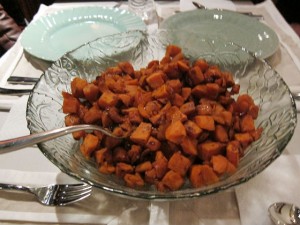 Good: These were the runner-up to the mashed potatoes, especially in terms of appearances. They genuinely resembled something you could have made yourself at home, cubed and roasted in the oven.
Bad: The flavor was too clove-heavy for most people, and even I could only eat a few bites before the sweetness became too cloying.

Good: It was gravy.
Bad: It was gravy. There’s not much to say here. I think it was mostly cornstarch and brown food coloring, but it was inoffensive and tempered the salt in the cornbread stuffing. 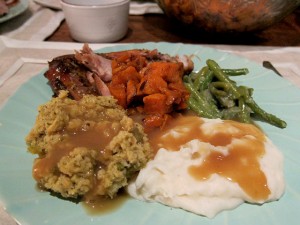 If you are the type of person who desperately wants to host Thanksgiving in your own home but doesn’t want to/doesn’t know how to cook and also somewhat dislikes the people you’re inviting over, this box is for you. It definitely cooks up in the promised 90-minute time span  although that time could be better spent eating out at a restaurant that’s open on Thanksgiving Day.