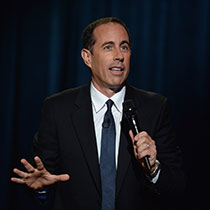 How Jerry Seinfield Ended Up On Wale’s Album

Jerry Seinfeld, the actor, is actually even cooler than the namesake of his popular, long-running sitcom. This week, the Emmy Award-winning comedian makes his hip-hop debut, appearing on a skit on Wale’s The Gifted that is expected to land in the top 10 on the pop charts next week. On the outtake recorded in April, Seinfeld arrives […]