Watch the video below of these women making complete fools of themselves.

Christian Massey, 21, was gunned down in an alley over his pair of popular “Beats By Dre” headphones. The young man had just bought them with his hard earned money on Black Friday and in a twinkling of an eye, he lost his life when he refused to give them up. To make matters even […] 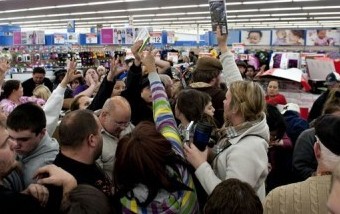 According to a statement Walmart released Friday, the company sold 2.8 million towels, 2 million TVs, 1.4 million tablets, and 1.9 million dolls. Not only were people buying towels at Walmart, the Wall Street Journal’s Tom Gara found that customers were turning violent to buy inexpensive ones. He gathered the following tweets about a specific incident in West Memphis, […]