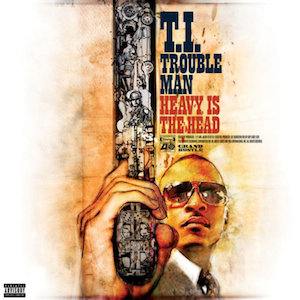 Rapper T.I. is taking fans back to the Blaxploitation Era with his cover art of his upcoming album ‘Trouble Man: Heavy Is the Head.’ The Atlanta rhyme-spitter is looking very mack-ish while holding a gun his hand.

We don’t know if the big-box stores like Wal-Mart will nitpick over the cover, but the artwork is fantastic. If you look closely you can see smaller images of dice, women, cars and the law etched into the silhouette of the pistol.

The 16-song album itself is locked and loaded with numerous guest appearances, including Lil Wayne who appears on the lead single, ‘Ball.’ Meek Mill, A$AP Rocky, Andre 3000 and Akon make cameos as well. One song that peaks our interest features the Tipster teaming up with pop superstar Pink on ‘Gun and Roses.’

On the production end, hit-makers No I.D., T-Minus, DJ Toomp, Rico Love and Pharrell Williams crafted beats for the project.

“I think it’s a lot more urban than ‘Paper Trail,’ and less apologetic than ‘No Mercy,’ says T.I. about ‘Trouble Man.’ “It’s got a lotta heart, it’s got a lotta edge. It’s a creative album. It’s probably harder than most of the s— that’s coming out right now.”