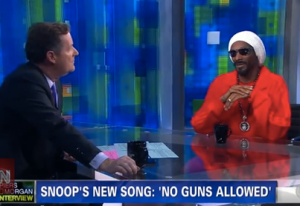 Snoop Lion – a.k.a. Snoop Dogg – believes guns should be more difficult to buy.  The gangster rapper turned Rastafarian stopped by the set of CNN’s “Piers Morgan Tonight” on Thursday and talked gun control among other topics.

Snoop blames America’s gun issues on the idea that Americans idolize guns.  He says Americans are guilty of “promoting the gun as one of the most highly touted things.”  Snoop admits that much of that influence comes from the entertainment industry, but says the real issue is figuring out how to prevent tragedies from happening again.

Snoop also opened up about changing his name from Snoop Dogg.  He says the name change was part of a spiritual evolution that he had while recording his upcoming reggae album Reincarnated in Jamaica.

Snoop’s spiritual rebirth has allowed him to create songs that represent his true spirit.  He says he always felt that his music wasn’t coming from his heart and that now he is able to make music from “a place of love.”

Reincarnated hits stores on April 23rd.  Before that fans can catch Snoop’s journey to the Rastafari movement on his “Reincarnated” documentary which hits theaters on March 15th.