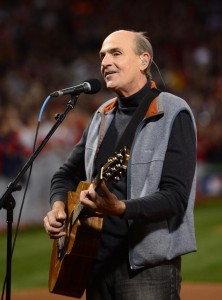 In a momentary lapse, five-time Grammy Award-winner James Taylor thought he was singing “America the Beautiful” at the Thursday night, October 24 Game 2 of the World Series at Fenway Park. But the 65-year-old musician, quickly realizing just after dropping the first two words of the patriotic song, effortlessly transitioned to the opening line of the national anthem “The Star-Spangled Banner” which he was supposed to deliver at that time.