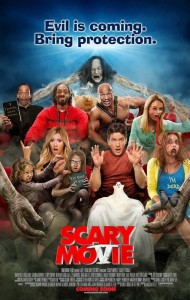 Did they try too hard to be funny? The new trailer for “Scary Movie 5” is out along with a new poster. While the new poster features the main characters, the new trailer focuses on a couple with two kids whose house is haunted. The family experiences spiritual activities in the house and tries to get rid of the spirits.

The new trailer shares some new scenes, like the one set in a cabin where two little girls suddenly appear in front of two men and one of the girl bites one of the men. Another one is a scene where Ashley Tisdale is accompanied by Erica Ash to come to a house where they try to find a book that can stop the evil spirits.

“Scary Movie 5” follows happily-married couple Dan (Simon Rex) and Jody (Tisdale) who begin to notice some bizarre activity once they bring their newborn baby Aiden home from the hospital. But when the chaos expands into Jody’s job as a ballet dancer and Dan’s career as an Ape researcher, they realize their family is being stalked by a nefarious demon. Together, with the advice of certified experts and the aid of numerous cameras, they must figure out how to get rid of it before it’s too late.

The film directed by Malcolm D. Lee and written by David Zucker spoofs “Black Swan”, “Paranormal Activity”, “Rise of the Planet of the Apes”, “127 Hours”, and a lot more. “Scary Movie 5” will hit U.S. theaters on April 12.