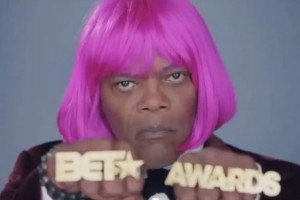 Don’t let this face fool you. Samuel L. Jackson’s promo for the 2012 BET Awards is actually hilarious. So much so that we’ve watched the 22-second vid about 46 times.

The promo first features the actor and host of the award show turned away from the camera, speak-rapping Nicki Minaj‘s song ‘Beez in the Trap’ and keeping time with his clapping. We’re thoroughly impressed at how PG he kept it. And then, surprise! He turns around brandishing the rings you see above and based on his face, you’d all better be watching the BET Awards.

The show will be held at the Shrine Auditorium in Los Angeles on July 1, and will feature an array of chart topping artists including Usher, 2 Chainz (who’s featured on ‘Beez in the Trap’), Chris Brown, and of course, Nicki Minaj. It was also recently announced that Kanye West‘s G.O.O.D. Music Family will perform as well.

Now Jackson’s threatening face, we’ll probably turn into the show just to see him in action that night. Hopefully, he’ll join Nicki Minaj and 2 Chainz on stage to rap alongside them. That’d go down in BET Awards history for sure. Until then, just enjoy watching the video over, and over, and over again.