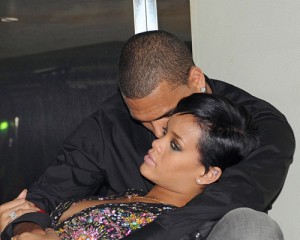 The young stars spent their Thanksgiving holiday together in Berlin. Following her 777 Tour stint in Berlin on Nov. 18, RiRi returned to the German capital on Nov. 22 to take in Breezy’s show. Prior to the trip, she posted a photo in her private jet, writing, “All alone in my big ole jet!!! See u soon lover.” Later, she tweeted some more cryptic Chris Brown-related messages, including “#Berlin #CarpeDiem;” “Carpe Diem” was the name of Brown’s tour.

The reunited pair were spotted attending and leaving a Thanksgiving party together in the same car. The couple were whisked back to Breezy’s hotel. Breezy will be in Germany again tomorrow for his concert at Hanns-Martin-Schleyer-Halle in Stuttgart.