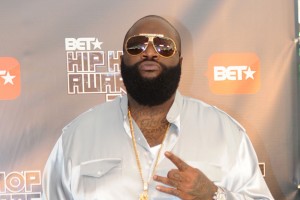 Gang Members hold Rick Ross back from performing at  a concert…..

From HiphopDX, ” Rick Ross and his MMG squad are forced to cancel their shows in North Carolina.

The gang posted death threats after Rick Ross used a six-point star on the cover of The Black Bar Mitzvah, seemingly forgetting that the Star of David has been a symbol of the Jewish faith for literally hundreds of years.
The group laying claim to the symbol, the aptly-named Gangster Disciples, warned Ross in a YouTube video about coming to North Carolina in a video released a month ago, reports the Charlotte Observer .

Charlotte-Mecklenburg Police were on alert for the event, but a decision was made to nix the show, which was set to feature Wale and Meek Mill.