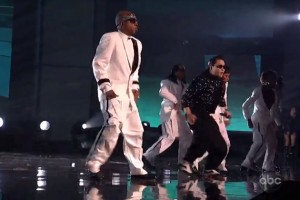 The fact that K-Pop sensation Psy, who shot to fame as a YouTube sensation, closed the 40th anniversary edition of the American Music Awards last night (Nov. 18) with his viral smash ‘Gangnam Style’ was indicative of the times we live in. The AMAs may be four decades old, but they change with the times and are certainly embracing the digital age.

Psy, however, looked like he picked up his stage clothes at least three decades prior. Wearing a sparkly, sequined, cropped black jacket and Hammer Pants with a sagging crotch, Psy came screaming out of the ’80s.

Musically, though, he was on point with 2012, with synthy, digitally enhanced dance music. That is, until the real MC Hammer joined him onstage to mash up his own ’2 Legit 2 Quit’ anthem with ‘Gangnam Style.’

Hammer was dressed in all white, a contrast to Psy’s all-black ensemble, but the two men from different eras and generations of music were spot on and in perfect time with their choreography. They fit like two pieces of the AMAs musical jigsaw puzzle.

Hammer, wearing a doo-rag and sunglasses, certainly knows how to dance Gangnam style… And his presence was why Psy’s pants made perfect sense. He wasn’t just nodding to MC Hammer — he was dressing like his co-performer.