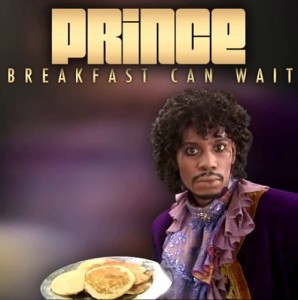 Grammy Award-winning singer-songwriter Prince is finally loosening up, not only letting go of his longstanding battle against the internet by embracing his new found use of Twitter, but also putting in a good measure of humor in his latest tweet. The Purple One posted an amusing artwork for his new single “Breakfast Can Wait” on his 3rd Eye Girl account along with the 48-second snippet of the track.

In the skit, Murphy recounts a night when he and his brother Eddie met the artist and his band at an L.A. club in the ’80s and later getting invited by the musician to his mansion where they engaged in a late-night match of basketball. After Prince and the Revolution crushed Murphy and his gang, they all got back inside for breakfast, with Prince serving pancakes.

Quite wittingly, Prince captioned the single artwork and audio clip with “Game: Blouses,” the famous line uttered by Chappelle (as Prince) after he and his crew trampled the other team, which Murphy initially termed as a game between the “shirts” versus the “blouses”, since Chappelle did not change out of his costume before playing the round of basketball.