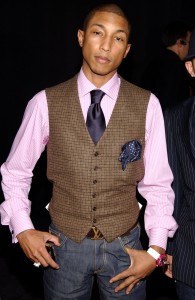 Pharrell is engaged in a battle with Marvin Gaye’s estate over Robin Thicke’s megahit “Blurred Lines,” he wants to make one thing clear — he has incredible respect for the late soul legend.

“I’m a huge fan of Marvin Gaye. He is a genius. He is the patriarch,” Pharrell said on Thursday night…..
Pharrell told The Associated Press on Thursday night that the two songs are not similar at all.
“If you read music, all you have to do is read the sheet music. It’s completely different,” he said while on the red carpet during an event for the Calvin Klein Collection during Fashion Week.
Gaye “is the king of all kings, so let’s be clear about that. And we take our hats off to him,” he said. “But anybody that plays music and reads music, just simply go to the piano and play the two. One’s minor and one’s major. And not even in the same key.”