NICKI MINAJ ON ‘THE TONIGHT SHOW’ 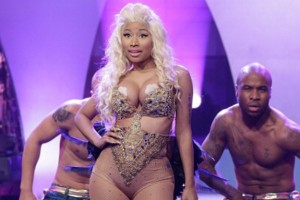 Nicki Minaj showed that her colorful personality extends beyond pink in her appearance on ‘The Tonight Show.’ In addition to a smokin’ hot performance of ‘Pound the Alarm’ in which censors were probably thanking their lucky stars for her pasties, the Harajuku Barbie sat down with host Jay Leno and talked about everything from touring to Trinidad to why you shouldn’t ask for extra bread at Red Lobster. No, seriously.

Leno asked about Minaj’s first headlining tour, which was a different experience for her since she was used to opening up for Britney Spears and Lil Wayne. “It’s always really nerve wracking, because you never know if people are going to be like, ‘Get off the stage, psycho person that I don’t know,’” Minaj said, eliciting a chuckle from the audience. “So I was always in a rush to get off the stage.”

Minaj revealed that moving from Trinidad to New York City at a young age was a bit of a culture shock, but that she and her family were pretty excited about it for one huge reason: “We had never seen snow! We were used to just hot, hot, hot. When we got there we just wanted to make snow angels, and that was like the highlight of our lives.”

Minaj revealed that when she worked at Red Lobster, the customers “hated” her. “I didn’t want to to be there and the customers could tell,” she said. “I was like, ‘Are you ready to order?’ And they always wanted extra bread, and it was annoying.” She actually explains why asking for extra bread is irritating — and how one particularly cruel table of people stiffed her and “traumatized” her. Poor Nicki!

Tune in to find out why Jada Pinkett Smith inspires her and why her ‘Ice Age 4′ character has an attitude problem — and watch her kill it with her island-inspired performance of ‘Pound the Alarm!’