NICKI MINAJ HAS ANOTHER NIP SLIP ON 106 AND PARK 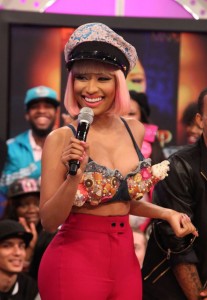 Nicki Minaj is really putting Janet Jackson to shame with all of these accidental nip slips, isn’t she?

The ‘American Idol‘ judge stopped by BET’s ’106 & Park’ wearing high-waisted pink pants, and a bustier encrusted with sweets. Yes, you read that right. The bustier came adorned with fake cupcakes, doughnuts, candy, all of the things that would make Willy Wonka crumble to his knees out of sheer excitement.

The rapper, who had been discussing her latest album ‘Pink Friday: Roman Reloaded – The Re-Up,’ must’ve been a little too excited because that’s exactly where the nip slip occurred… and she didn’t even notice!

However, the rapper handled it with grace and humor, joking, “You guys have seen my boobs before. You won’t tell anyone, will you?”