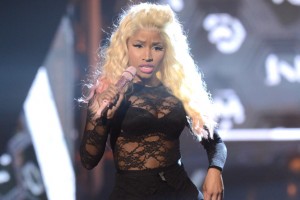 Nicki Minaj brought her hip-hop side out in full force at the 2012 BET Awards, shutting up any of her critics who claimed she sold out as pure pop, while still maintaining the onstage theatrics that have become one of her trademarks.

Minaj had an operatic opening, full of bright lights and strategically placed silhouettes as she performed ‘Champion.’ She was surrounded by flood and spotlights, letting her voice take center stage once she stepped out of their shadows. The Harajuku Barbie and unofficial spokeswoman of the color pink was more demure than usual, sporting a black lace bodice with a full skirt and pink tips in her platinum blonde wig. The somewhat conservative (for her) getup suited the sometimes somber notes in the song.

But of course, when you have curves like Nicki’s, you can’t help but flaunt them. Launching into ‘Beez in the Trap,’ Minaj lost the skirt, revealing a, well, revealing black leotard that left little to the imagination.

Flanked by dancers, fire, lasers and a honeycomb backdrop, Minaj spit her usual and expected lyrical fire to the delight of  Beyonce, Birdman and Tyga, who were all spotted rapping along and grinning. When 2 Chainz came out for his cameo, he sent the crowd into an absolute frenzy.