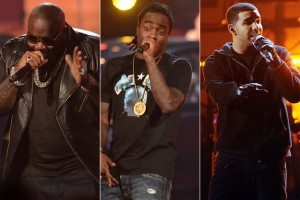 With less than a week before Rick Ross drops his ‘God Forgives, I Don’t’ album, a new song from the collection titled ‘Diced Pineapples’ leaked via the Internet on Wednesday (July 25). Produced by the Cataracs, the piano-driven track also features spoken-word poetry from Wale and Drake rap-singing the hook.

The song was inspired by Ross’ medical scare last year when he was hospitalized after having two seizures in one day. “When I got out of the hospital … the doctor told me, ‘You gotta eat some more fruit, drink you some water, eat fruit and just relax for a little while.’ My fruit of choice was pineapples,” he told MTV’s RapFix. Doctors gave the Miami rapper some great advice.

On the sensual rap ballad, Rozay reminiscences about that special woman who tasted sweet like diced pineapples. “Shorty so fine, p—- so fresh / Diced pineapples that my baby tastes the best / I nearly lost my mind, guess it was a test / Swept her off her feet and went and bought her a– a Lex,” he raps. “She know how to make me smile / She do it with the sex,” he later adds.

We all know Wale can be romantic as evident on his chart-topping hit ‘Lotus Flower Bomb.’ On ‘Diced Pineapples,’ the DC rapper seduces with metaphoric rhyme flow. “Something about her probably can’t live without her (word) / Roll up some sour, let me kiss on a fountain / Mission accomplished / You’re increasing your heart rate / And I won’t ever rest, we meet at the peak of your mountain,” he raps.

Drake is regulated to chorus duties as he sings from the viewpoint of a guy reconciling with his ladylove after a heated break-up. “Feels better when you let it out, don’t it, girl,” he rap-sings. “Then we f— all night ’til things get right.”

‘Diced Pineapples’ is a smooth song that shows the romantic side of the Bawse and is a taste of how flirtatious he can be with the ladies.