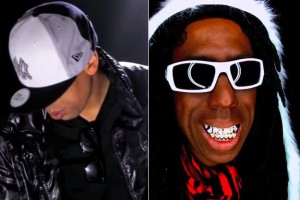 Affion Crockett strikes again! The funnyman, who known for his dead-on impressions of Drake, Michael Jackson and Chris Brown, returns as Jay-Z and pokes fun at Lil Wayne for his unique, um, fashion sense.

In his hilarious video titled ‘WTF,’ Crockett as Jay-Z raps about Weezy’s lack of skateboarding skills and questions why he wears spandex and furry boots. “If Elmo was gangsta / He would dress like Wayne does / Thank God that he’s sober now,” he raps. “He needs fashion rehab / He’ll dress well when he’s back / Or he will be an OutKast / All Dre, Three Stacks.”

Crockett’s impression of Lil Wayne needs some work, but his explanation of why he dresses so eccentrically is just as comical. “I’m going to let my hair down / I’m going to let my pants hang / Show the world my red drawers / Doesn’t mean a damn thang,” he spits. “Now I got a wedgie in my cheek section / Testicles are swollen / Yeast infection.” Eww!

Of course, all of this is in jest, so we don’t think Jay-Z or Lil Wayne will be upset with Crockett poking fun at them.