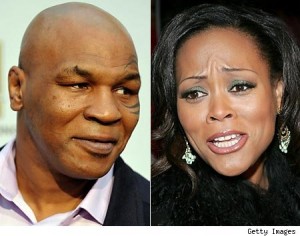 In an interview on the In Depth with Graham Bensinger show Tyson said he was in the process of his divorce from Givens when he came home to find her in bed with Brad.

“I would go to my lawyer’s office to say she’s a pig and stealing, I would go to … her house to have sex with her. This particular day, someone beat me to the punch. And I guess Brad got there earlier than I did,” he said.
He continued, “I was mad as hell. I was going to … you should have saw his face when he saw me.”
Speaking about his foray into movies with his cameo in ‘The Hangover’, Tyson said the cast, including Bradley Cooper, helped him get through his scenes despite the fact he was high.
“I was a mess,” he said. “I was overweight. I was a pig, high on cocaine.”
“They had to know I was messed up. I couldn’t talk. I had the cocaine talk … So those guys are just beautiful people,” Tyson said.
“They had my back, and I appreciate that and stuff, then they asked me to come back (for the sequel).”
Thankfully, Tyson’s now got his life back on track it seems and as reported by RadarOnline.com, the heavyweight champ is now happy with third wife Lakiha Spencer and working on a national tour ‘Mike Tyson: Undisputed Truth’, that has pulled him out of bankruptcy.
And Brad is also set to walk down the aisle any day with other half Angelina Jolie. But, unlike their celeb status, reports suggest that the pair want to keep it ‘a simple affair’.
“One thing’s for sure, he says it’s going to be all about family: a simple affair with Angie and the kids,” People magazine’s senior writer Jennifer Garcia revealed recently.