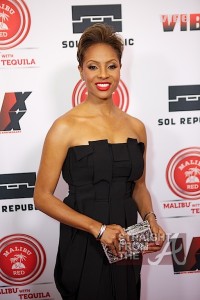 Hip-hop legend MC Lyte will be honored with the I Am Hip Hop Award at the 2013 BET Hip-Hop Awards. The event will take place on Sept. 28 in Atlanta.

When informed of the honor, MC Lyte replied, “I love how that sounds. Let’s make it happen.”

A native of Brooklyn, N.Y., Lyte (né Lana Michelle Moorer) first gained notoriety with her 1988 debut album, ‘Lyte as a Rock.’ During her rap career, she recorded several No. 1 rap hits including ‘Paper Thin,’ ‘Cha Cha Cha’ and ‘Ruffneck,’ which garnered her a Grammy nomination for Best Rap Performance in 1993.

Along with her musical achievements, the 42-year-old artist is the founder of the Hip Hop Sisters Foundation, which offers a $100,000 academic scholarship to the University of Wisconsin-Madison.

“I’ve accomplished a bit, but I’m still dead smack in the middle of wanting to do so much more,” said Lyte. “For example, with that scholarship, more money needs to be raised for books, for food, for travel.”

Hosted by Snoop Dogg, the 2013 BET Hip Hop Awards will be taped on Sept. 28 at the Boisfeuillet Jones Atlanta Civic Center. The awards will air Oct. 15 at 8PM ET on BET.