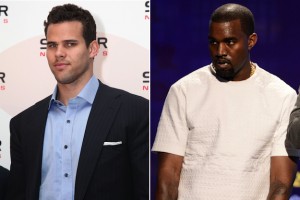 There’s an old saying, “He who laughs last, laughs the hardest.” For NBA player Kris Humphries, he’s laughing all the way to the bank. The power forward re-signed with the Brooklyn Nets in a two-year, $24 million deal. It looks like Jay-Z didn’t drop him from the team after all.

Humphries’ agreement is a major salary bump from his one-year, $8 million contract last season. “Kris has been a very consistent player for us over the past two years,” Nets general manager Billy King said in a statement (via ESPN). “He has developed into one of the top rebounding forwards in the league, and we are very pleased to welcome him back.”

This is certainly good news for the 27-year-old b-baller who is also infamous for his 72-day marriage to Kim Kardashian. The pair is now embroiled in a public and tumultuous divorce battle that has lasted longer than their marriage.

For those of you who don’t know, Kanye West is currently dating Humphries’ ex-wife. On a song called ‘Cold’ (aka ‘Theraflu’), Yeezy brags that he could have Jay-Z, who is a co-owner of the Nets, fired him from the team. The line goes: “And I’ll admit, I fell in love with Kim / ‘Round the same time she had fell in love with him / Well that’s cool, baby girl, do ya thing / Lucky I ain’t have Jay drop him from the team.”

Of course, this is not true since Jay-Z is not in charge of staff (and only owns 1.47% of the team), but it was a seething diss nonetheless. For the most part, Humphries took the put-down in stride and even made a parody video where he threw a subliminal jab at West.

Following the news that he re-upped with the Brooklyn Nets, Humphries posted the following tweet:

I’m up at Brooklyn!@S_C_“lucky I didn’t have Jay drop me from the team” lol!

*Cough* Now that’s cold. On the flip side, I found this fan made video for “Way Too Cold” which I think is hilarious: